I've been working on this tank top since February. I finished it before midnight, then I had to get the photo taken, so even though it looks like an April finish, it was done in March. 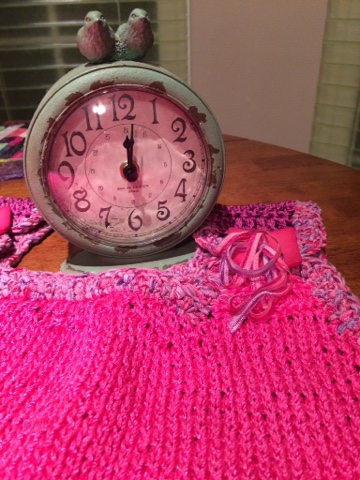 Clip boards were given a coat of gesso. Then fabrics were cut to size, after attaching fusible webbing to the back side. I painted the edges with Lumiere paints to finish them off, after they got a good sealing coat of Mod Podge. The fronts and backs are coordinated for each of the 'littles' that will get them. They work wonderfully for playing car bingo. 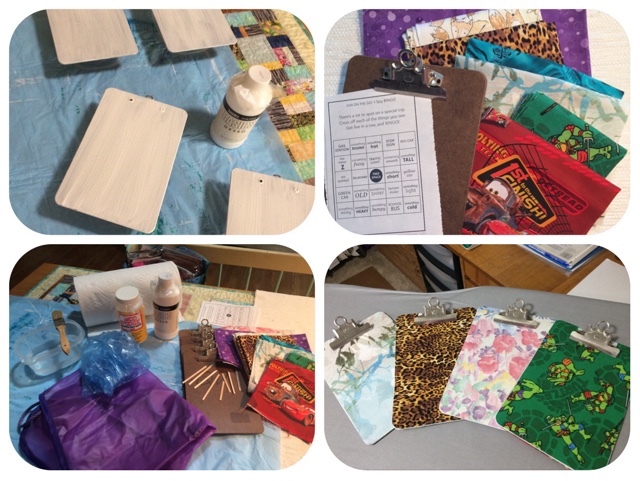 Here are some progress photos from work I've been doing on my Creative Adventure Journal. Brenda gave me an armful of upholstery samples. I cut them to a dimension I wanted and removed some of the information stickers from the backside. I ended up taking them apart once and trimming one that was too tall for the locker hooked cover I wanted them for. I sewed them together in groups, like book signatures. I used a sturdy mesh as an insert, but found that it didn't stand up along the spine. So, I tried an accordion folded piece of Decorbond. That worked great but it still needed more support for the cover insert areas. I finally decided to glue it to a couple of book covers that I had salvaged last year. Now it slips easily into the journal's inside flaps and I've already started to tuck in some goodies. 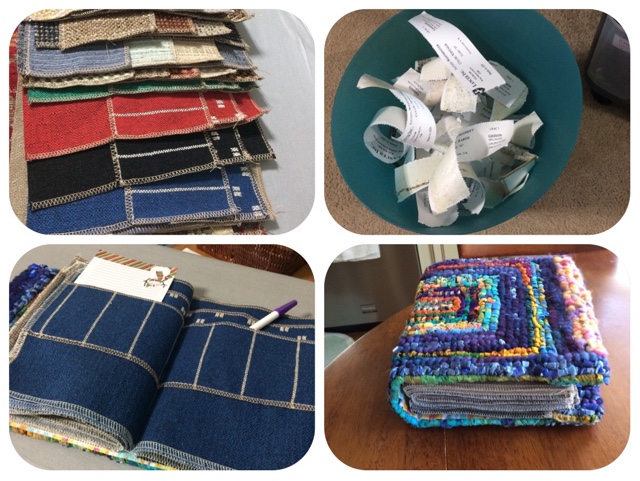 And because I enjoyed making the cover for the Creative Adventure Journal #1, and I have some pieces that are much larger that I want to use in the same manner, #2 is underway. Progress seems so much slower on this one, but it is 4 times larger, so I need to exercise my patience muscle! LOL 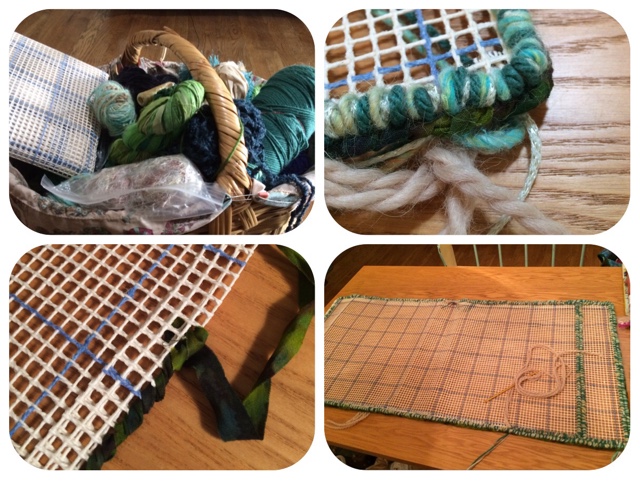 A while back I chose these four fabrics to do an experiment with. I layed them all on one stack, and cut through all four at once, several times. Then I started playing with which pieces would touch each other, and from there I would refer to it as my 'What Was I Thinking?' piece. Three of them are very soft and will become pillow covers at some point in time, but one was put together on that famous Decorbond product that I bought so much of! It will become a 'page' in Creative  Adventure Journal #2 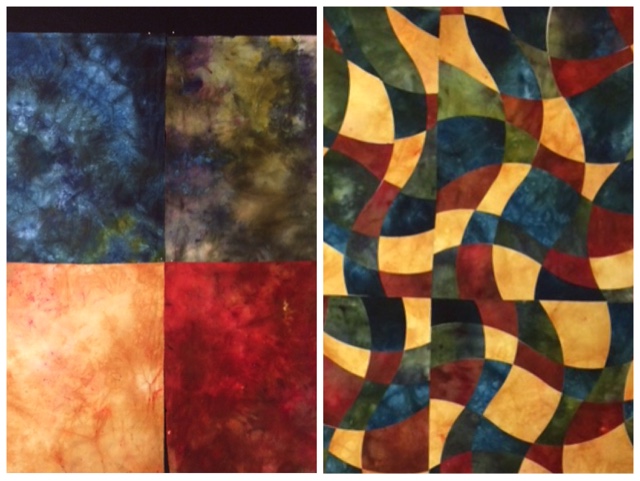 I was gifted this lovely assortment of vintage hankies. I've already been given the suggestion of making one into a pillow for Miss Hannah, she was born in Kentucky so I'm sure you know which one is on her radar. 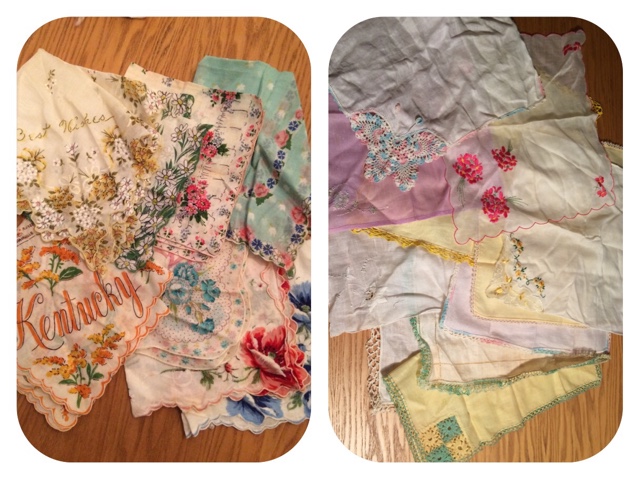 Aunt Marjorie had a special Birthday gathering, she has turned 90! I pray that God gives me the mobility and grace at that age that she displays. I made this lap size quilt for her. We asked those attending to write on the back and most everyone did. We used an Identipen. Many of the signers were surprised at how easy it was to write with it. And the buttons? Well, if I was going to embellish this quilt with some, these would have worked perfectly. (And I needed another image for the collage) 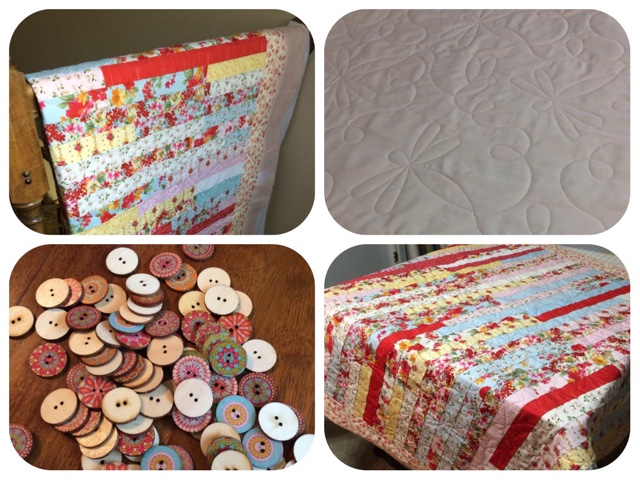 So many people just love purple that once I started this one, I knew who it would go to. Molly and Hannah said the fabrics were terrific and they were sure their mom would like it. The final picture doesn't show how pretty the colors were, something with my lighting at midnight? Perhaps. 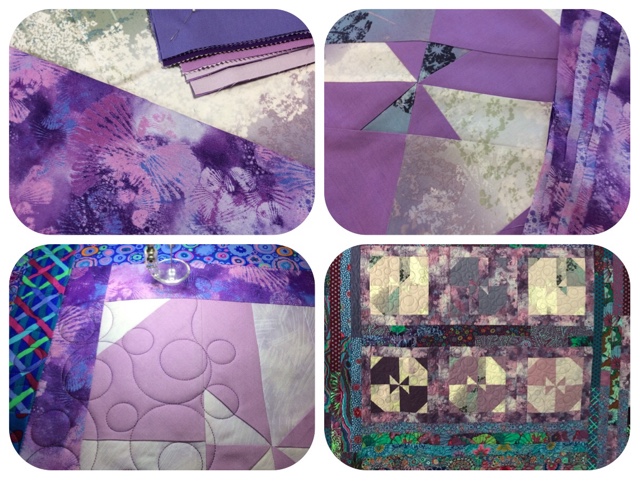 The clamshell quilt has had several starts. None of them are working for me. I'll keep searching until I find a good way that works and doesn't send me looking for headache medicine. Until then, I'm coloring mandalas while I ponder the possibilities. 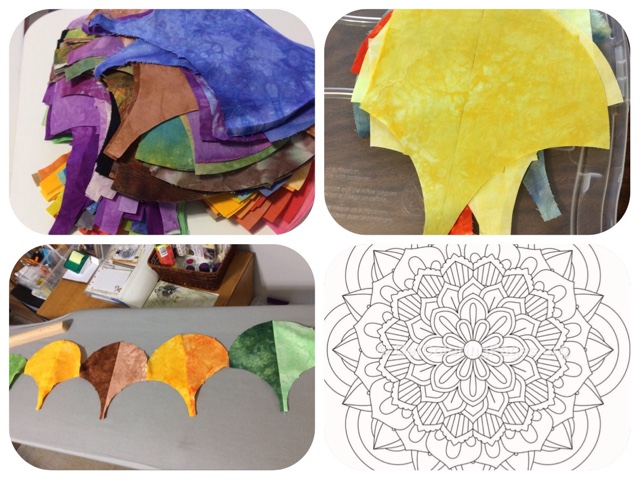 It was only taken me 5+ years to do the final trim work around the edges of this jacket. I think this will be gifted to ? I love the colors but the size isn't quite what I need now, argh! 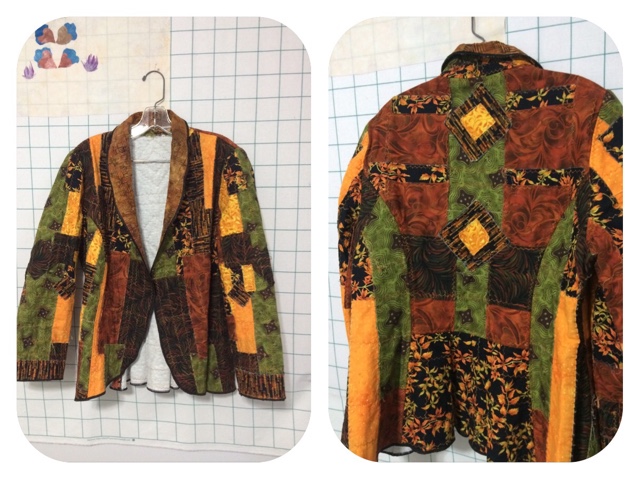 Last fall I order in some packets of Cake Mix Recipe #7 papers. How these work is; you put two 10" squares together with right sides facing, pin this on top, stitch on the lines, cut on the other lines, press, then remove the papers, and you have perfect half-square triangle units to sew together in any way you chose. They include 6 possibilities, but there are several more. I pulled out several stacks of layer cakes (that's what 10" squares are called, in case you aren't a quilter). I didn't agonize over the matching up process, just tried to get some reasonable contrast going on. I've started on my first little group. These were squares from the Sand In My Shoes collection, matched up with Kona Cotton Solids from a recent order of mine with Missouri Star Quilt Company. I really enjoy beachy colors. 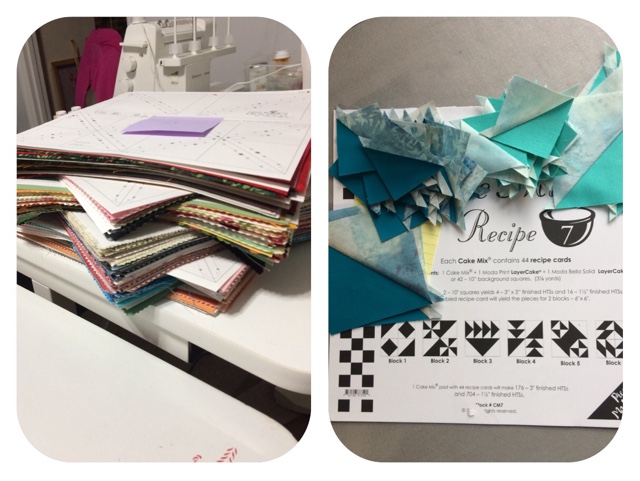 We spent some time visiting Hunting Island, Hilton Head Island, and Beaufort (SC) at the beginning of March. It was a great time and we were able to met up for brunch with Ken. It's always pleasant to see old friends that understand about 'barking spiders'. If you don't know about them, consider yourself special! 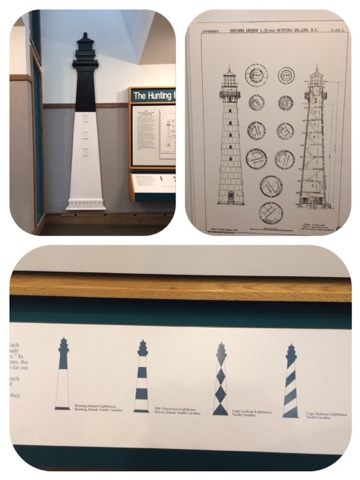 We always enjoy time spent at Middleton Plantation. The flowering trees and bushes were spectacular. 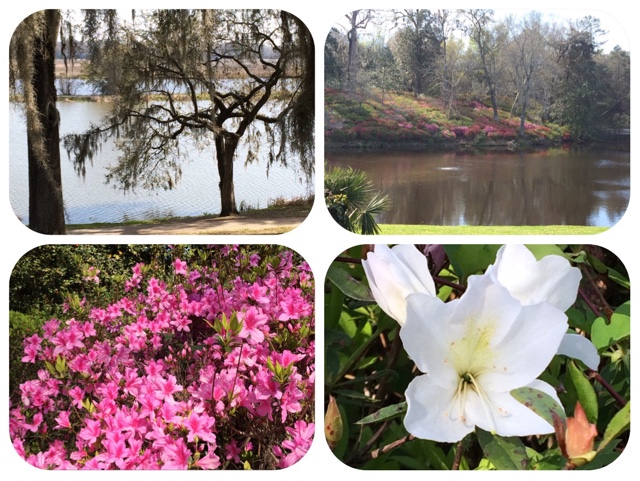 And in our own back yard there's always something to enjoy. 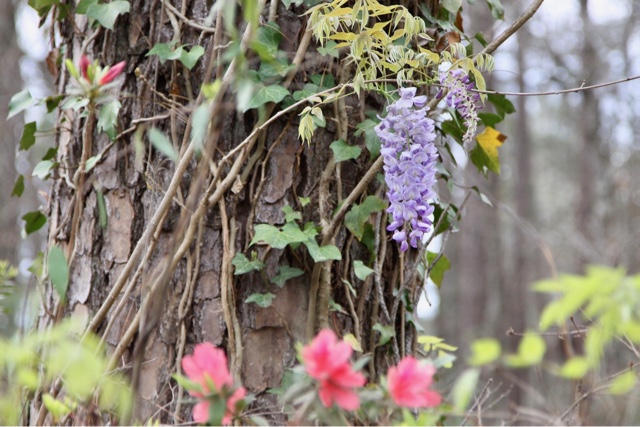 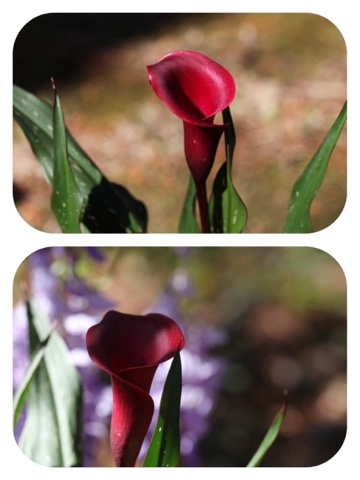 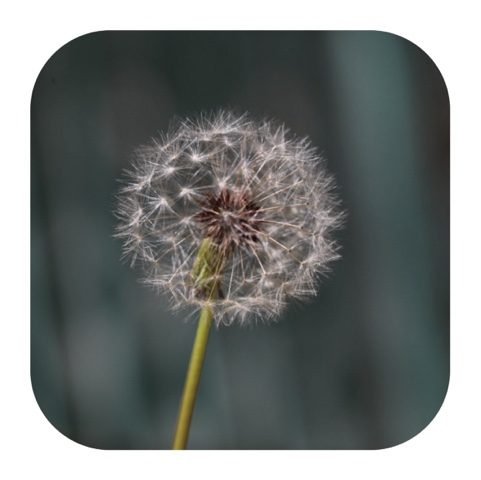 May God bless the work of your hands.
Posted by Luann Fischer at 4:46 PM

Email ThisBlogThis!Share to TwitterShare to FacebookShare to Pinterest
Labels: Review

I wouldn't have thought to weave yarn and fabric for a book cover; but, I like what you are doing! My favorite project is your experiment with the four fabrics for pillow covers. I like the way the blocks are coming together! You always accomplish so much in your month!!!!

Thanks for dropping by and commenting. The fabric journal cover is not truly woven, It is locker hooked through a rug mesh. She has written 2 books about it that I have found. Some others very interesting uses of the method are included. She has a website where she sells most everything you would need.

Lots of beautiful colour combinations Luann, your productivity is amazing. I am off to the Ballarat Fibre Arts for a week to work with Claire Benn, so looking forward to it and the weather is very mild for mid autumn, so lots of walks around the lake and taking pictures.

Joann, Have a wonderful time away. I’ll look forward to hearing about your adventure.

Okay so I was on pinterest and saw that someone made a fabric journal with handkerchiefs what to you think? I wander cause seems too thin but maybe reinforced? Well I have lots so that is a thought.

Luann, Again you amaze me at how much you accomplish in a month. Love the journals. I have some upholstery fabric I was given and I've been looking for a way to use it! Anyway, love what you're doing.

Thanks for stopping by Lynda. By turning the samples with several extra swatches attached to the bottom upside down, I could serge the edges and have pockets to use. Funny how when someone gives me something, I usually try to find a way to use it. Lately, I’ve been doing more ‘No thank you, at this time’ than ‘Oh, wonderful, I’d love it’. Rope bowls are on my radar, I dyed some clothesline but either I didn’t let it batch long enough or my dye is a bit old, they came out ‘washed out’ rather than vibrant. I may overdye them, or use them as is, with intensely colored threads, not sure yet.